The Rise of Digital Authoritarianism In Egypt: Digital Expression Arrests From 2011-2019

This report was published by the Open Technology Fund and is republished here with permission and thanks.

Since 2013, Egypt has seen the worst human rights crackdown in the country’s history. The current regime has imprisoned thousands of political activists, criminalized demonstrations, and seized control over the media landscape in a successful effort to limit genuine political discourse. Today it is nearly impossible for any alternative narrative to penetrate conventional modalities of expression. As the state continues to close physical spaces and exert control over traditional media, alternative political voices have been forced to rely on digital platforms as a means to express themselves. In response, the state has turned its attention to these platforms.

Digital rights in Egypt have been restricted by the government through a variety of mechanisms, including the deployment of new technologies to block websites, the legitimization of censorship and surveillance practices through law, and the propagation of narratives discrediting rightful digital expression. There has also been reporting about the targeting and arrest of Egyptian citizens for freedom of expression online.

Online censorship increased in 2017 when the websites of 21 independent media and political organizations were blocked inside the country in a single day. The number of blocked websites in Egypt has since surpassed 500. Large-scale phishing attacks are also frequently launched against Egyptian civil society, with attacks documented in 2017 and 2019. In 2018, several new laws were passed in Egyptian parliament limiting digital expression and inhibiting the right to privacy. 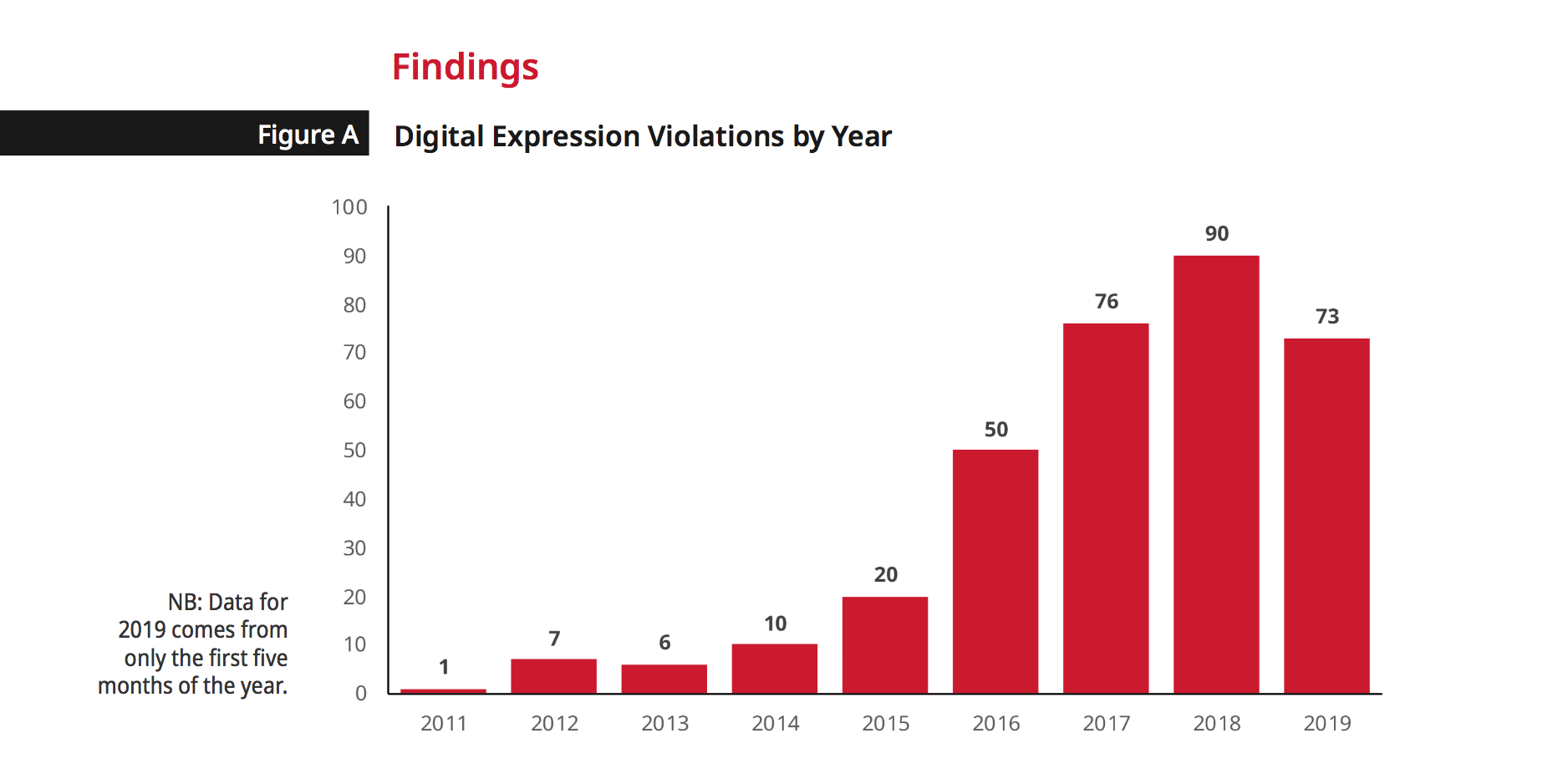 Egyptian security authorities routinely surveil and target social media posts—particularly Facebook content—as a basis for the arrest and detention of Egyptian citizens. The state relies on provisions such as “spreading false news,” “joining a banned group” and “misuse of social media” to detain citizens for digital expression. These charges are found in the Penal Code, the Counterterrorism Law, and the Telecommunications Law, rather than new and highly publicized laws such as the Cybercrime Law and the Media Regulation Law.

The consistent use of the charge “spreading false news” as a basis for arrest mirrors the dominant state narrative that social media is a pervasive threat to national security. The frequent portrayal of social media as a threat fostering chaos and undermining social unity normalizes and legitimizes digital expression arrests. Egypt’s Prosecutor General issued a decree in 2018 directing prosecutors to focus on cases concerning the spread of false news. A “rumour collection network” was established for citizens to send in reports of false news and rumours to a WhatsApp number—effectively crowdsourcing surveillance to the civilian population. 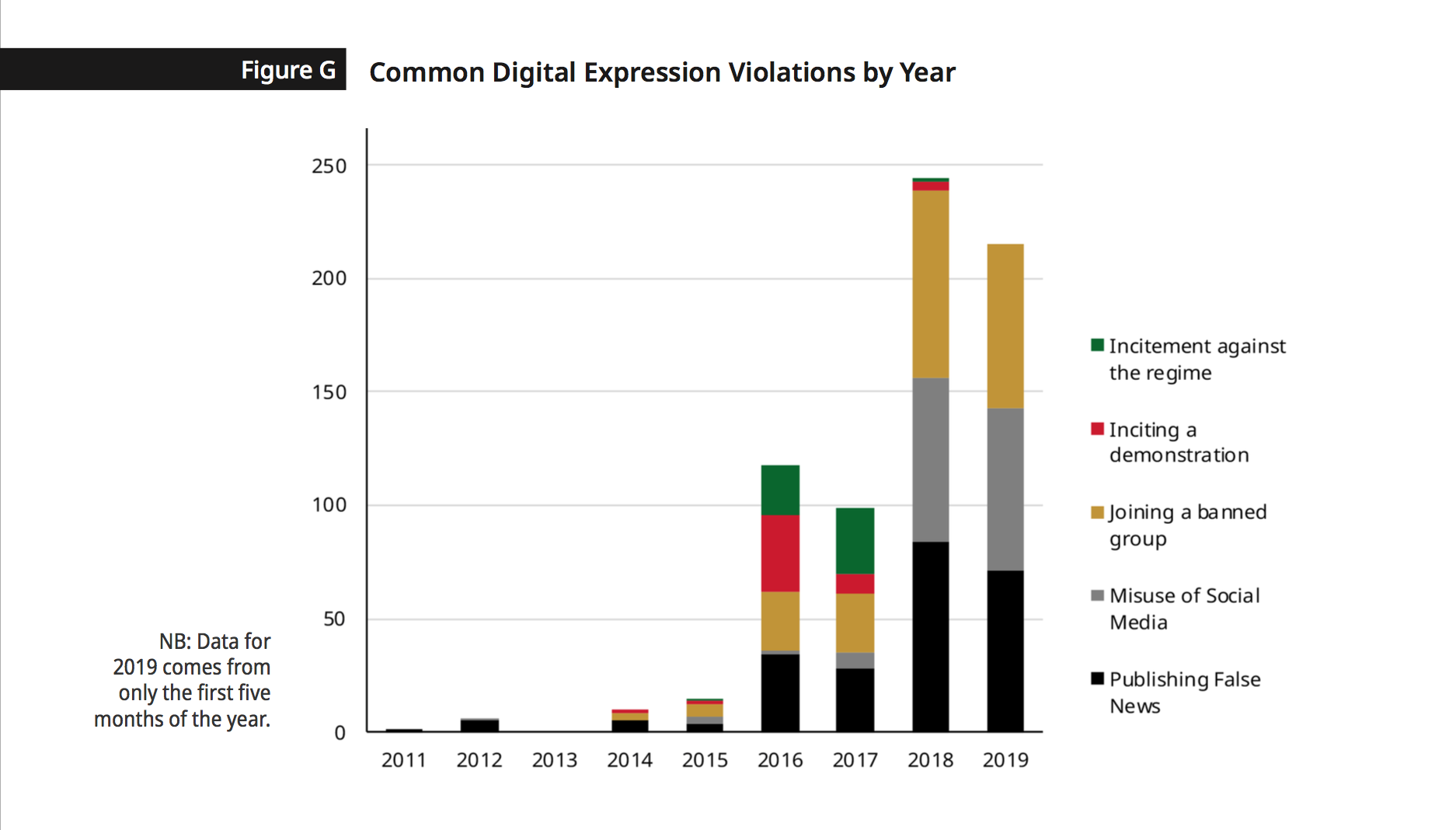 Social and other online activity accounted for the majority of cases, with “joining a banned group,” “misuse of social media,” and “publishing false news” the most frequently used charges

The data also reveals a dramatic increase in the use of a special prosecutorial body, the State Security Prosecution, to investigate digital expression cases. Beginning in 2017, the number of digital expression cases managed by the State Security Prosecution (SSP) rose significantly. The SSP is a special prosecutorial body which investigates and prosecutes cases related to national security and terrorism; it is notoriously subject to extraordinary procedural rules. The increase in the number of cases located at the SSP is correlated with an increase in the number of pretrial detention cases. Detainees held for digital expression violations by the SSP spend long periods in pretrial detention due to the unique procedural rules governing this body; many of these cases are never even brought to court. The use of the SSP to handle digital expression cases, instead of regular Egyptian criminal courts, suggests the state is exploiting the extraordinary procedural rules governing the SSP to hold defendants for extended periods of pretrial detention. These cases may have resulted in a lesser punishment if they were located within Egypt’s felony and misdemeanor courts. 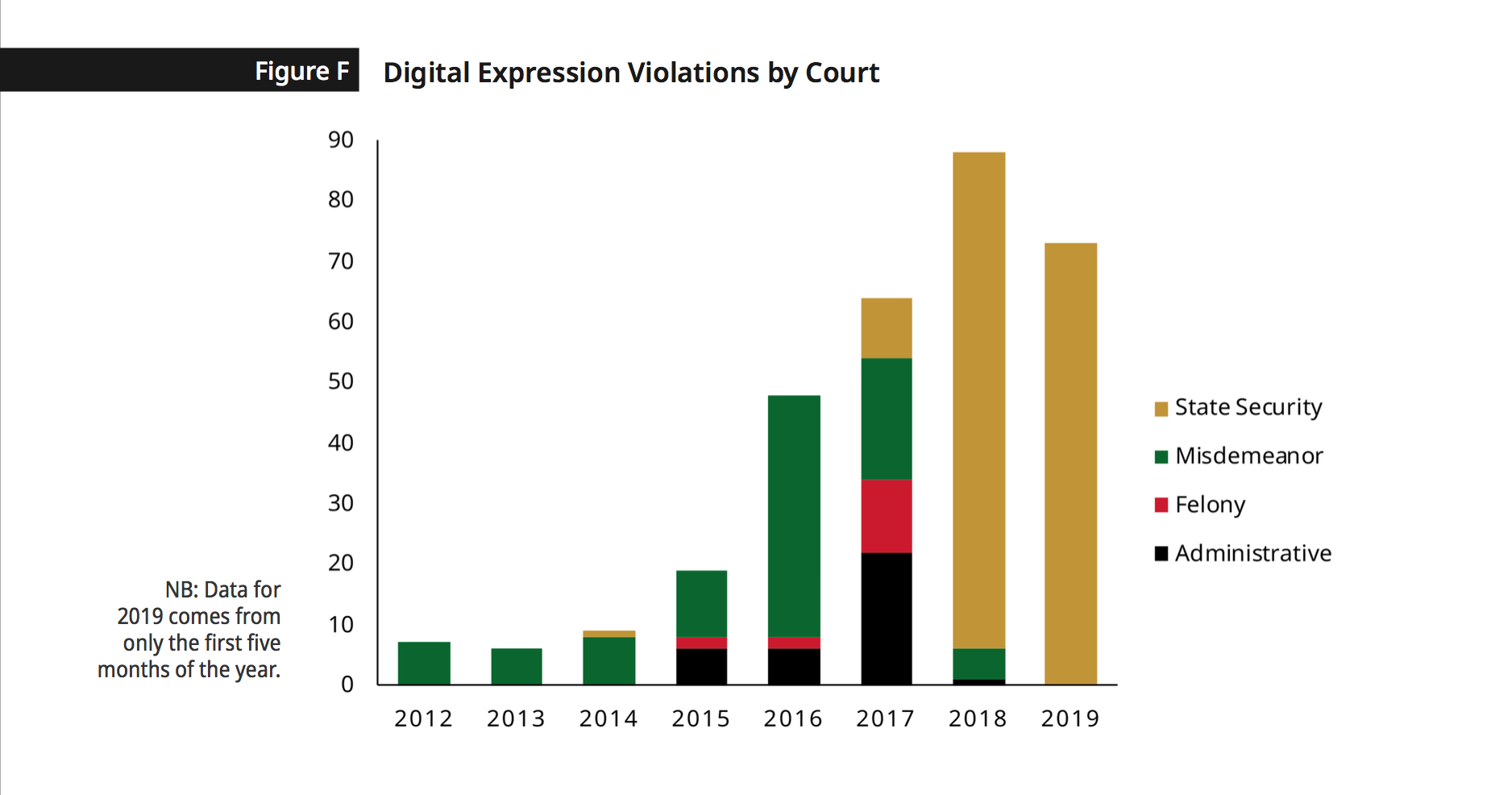 Beginning in 2017, the number of digital expression cases managed by the State Security Prosecution (SSP), a special body that focuses on national security and terrorism cases, rose significantly.

Egyptian security authorities surveil online expression through technically unsophisticated strategies such as device seizures, observation of social media platforms, and informant networks. Demonstration events on Facebook, particularly during periods of heightened political tension, are routinely targeted by security authorities. Videos are also frequently targeted, as they are easily shared and accessed. Analysis of the dataset found three main types of arrests: mass arrests during periods of increased political tension; high profile figures targeted for their cumulative body of work; and individual posts that cause a citizen to be targeted.

Given that surveillance of digital platforms and restrictions on digital expression has increased, this report provides an outline of these restrictions and their broad impacts on digital rights in Egypt. It comprehensively addresses a new facet of state efforts to consolidate power and ward off challenges to the current regime.

The report first provides a brief overview of the current political climate in Egypt and unpacks the dominant state narratives relevant to digital rights. It then examines the relevant laws, regulations, and decrees comprising the legal foundation for digital expression in Egypt. Next, the report presents findings from the digital expression violations dataset, highlighting key trends and developments. Finally, a series of case stories providing deeper context for these violations is presented.